EDITOR’S NOTE: Kiwi was the first UD of her breed and then went on to earn her OTCh. Kiwi is still the only dog of any breed to hold that distinction.

This is Part I of a two-part column by Amy Ammen[torp], the proud owner and trainer of our breed’s very first OTCH (and UD). Kiwi is also a conformation champion. Amy writes that she has been training dogs for fourteen years. She is a full-time, private, in-home dog trainer, and the only trainer in Wisconsin to have three OTCh. dogs! An enviable record, to be sure. EDITORS NOTE: Since the time of this publication, other trainers in Wisconsin have also achieved this milestone. 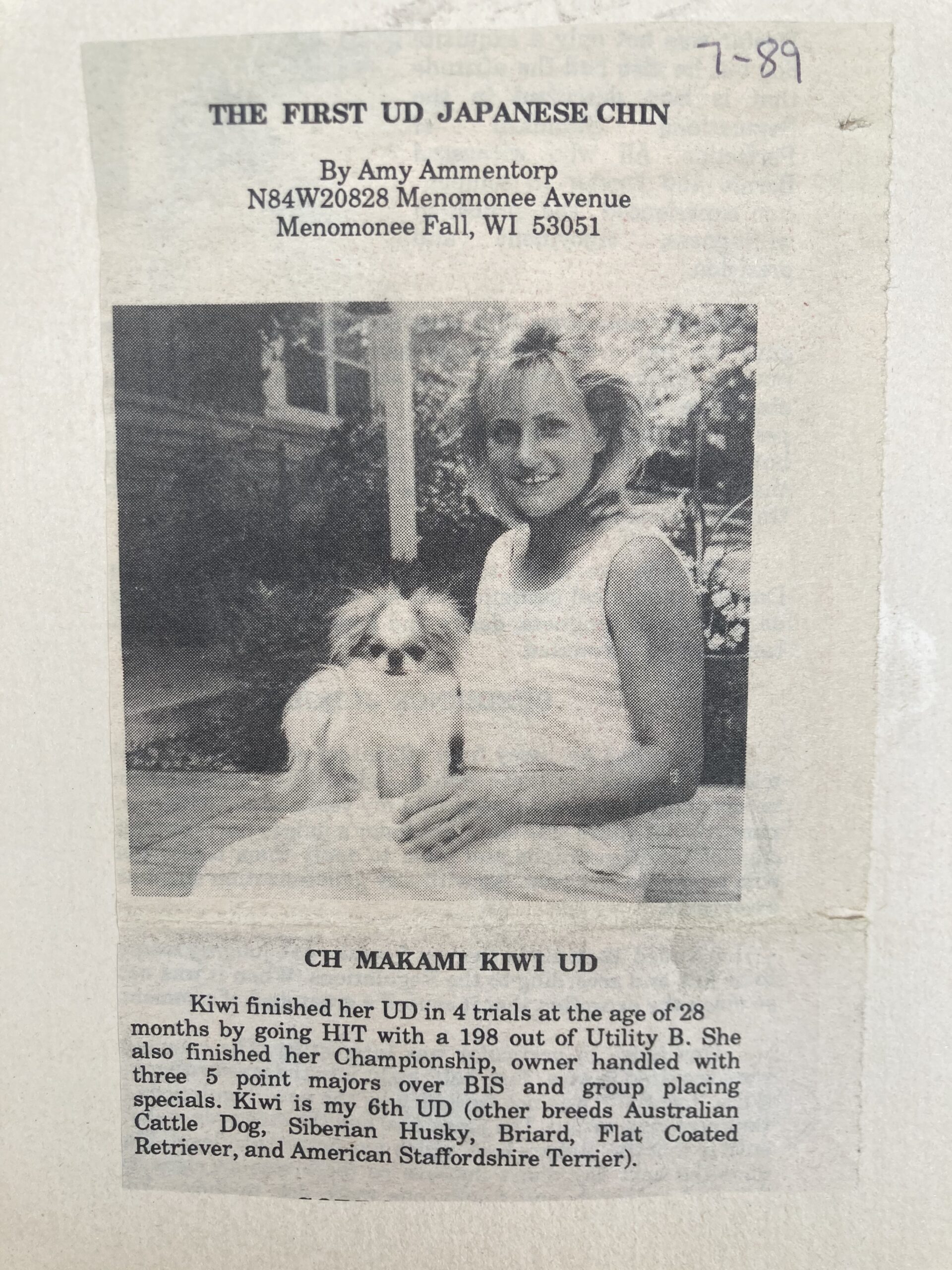 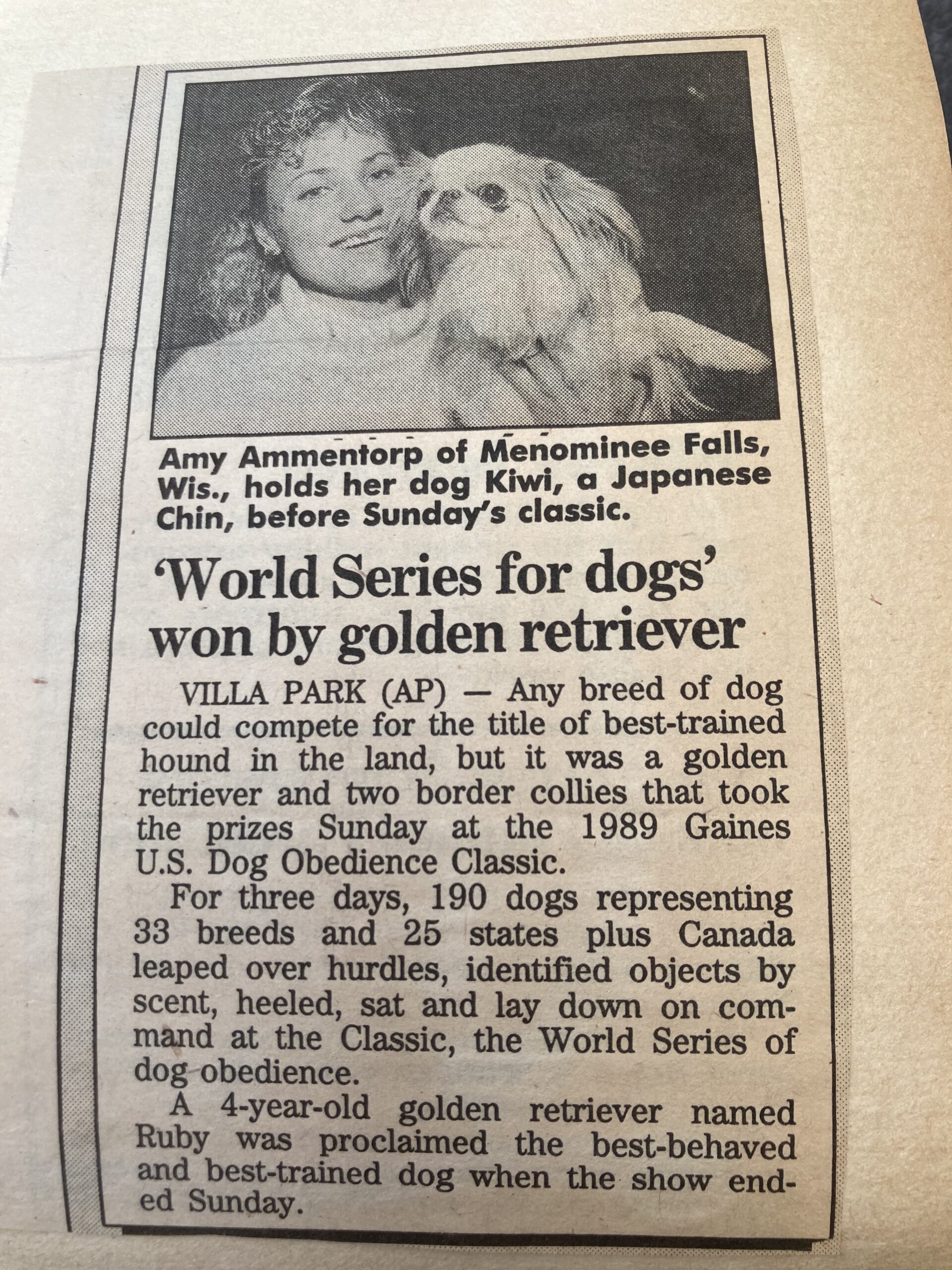 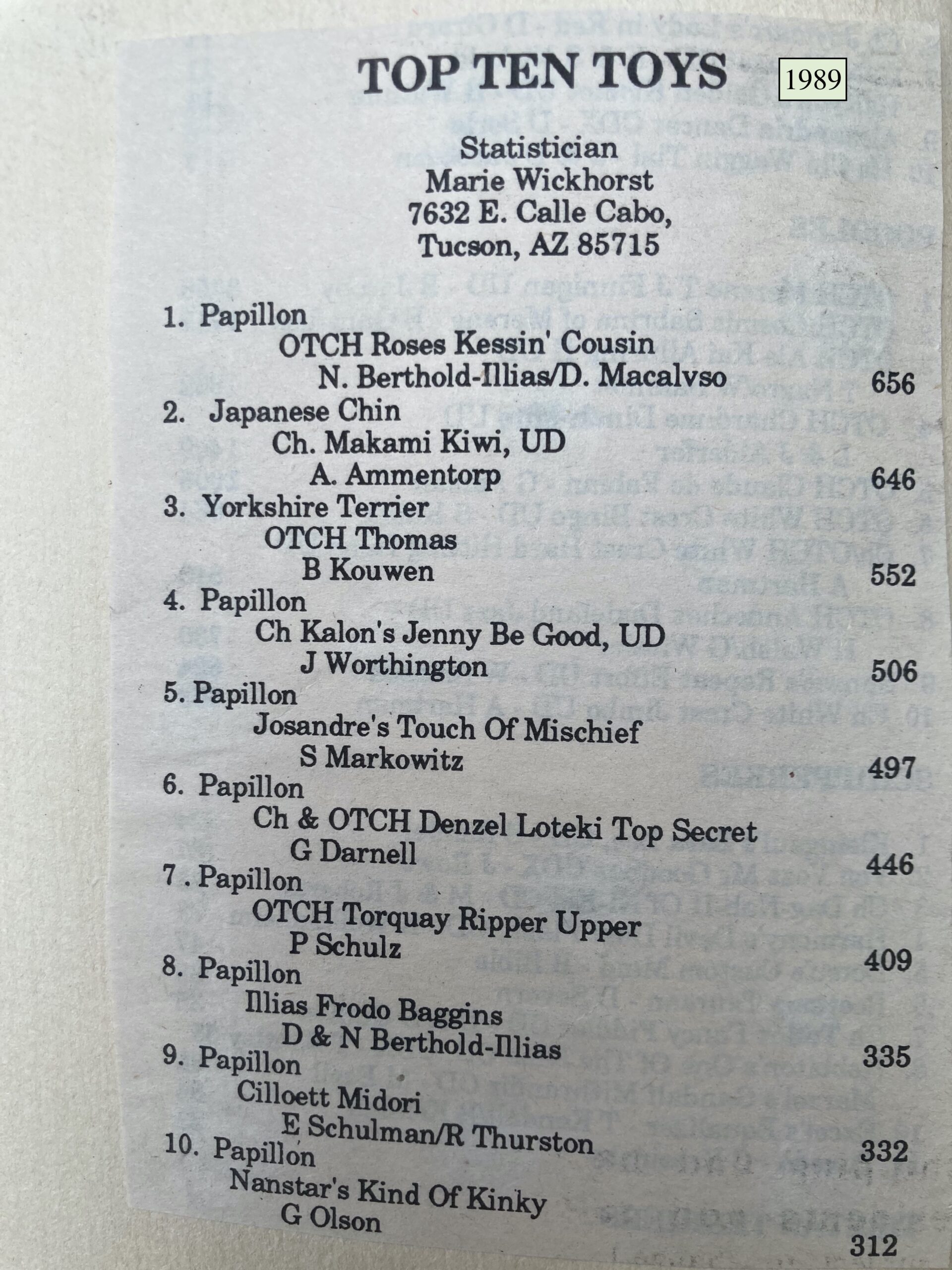 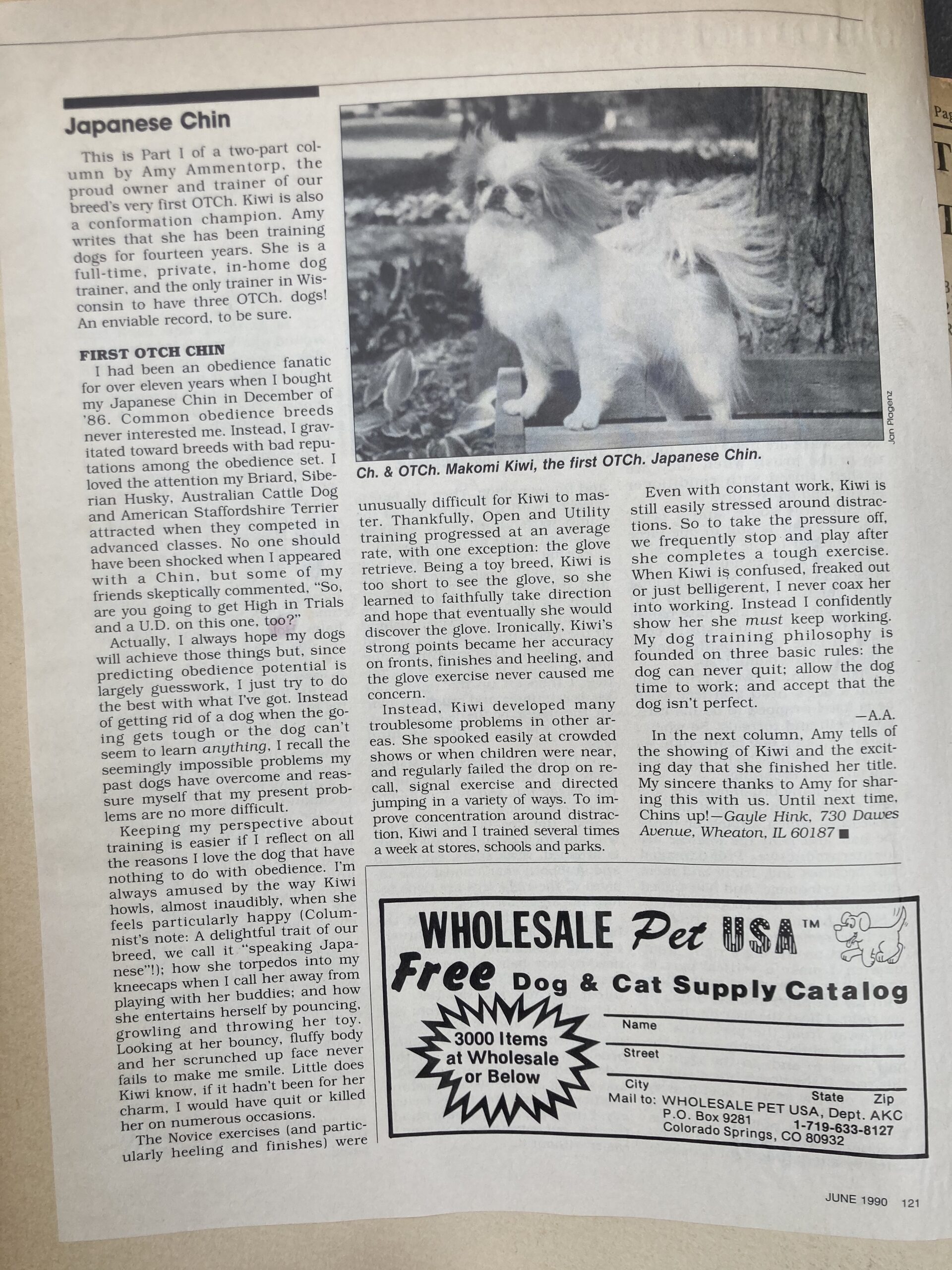 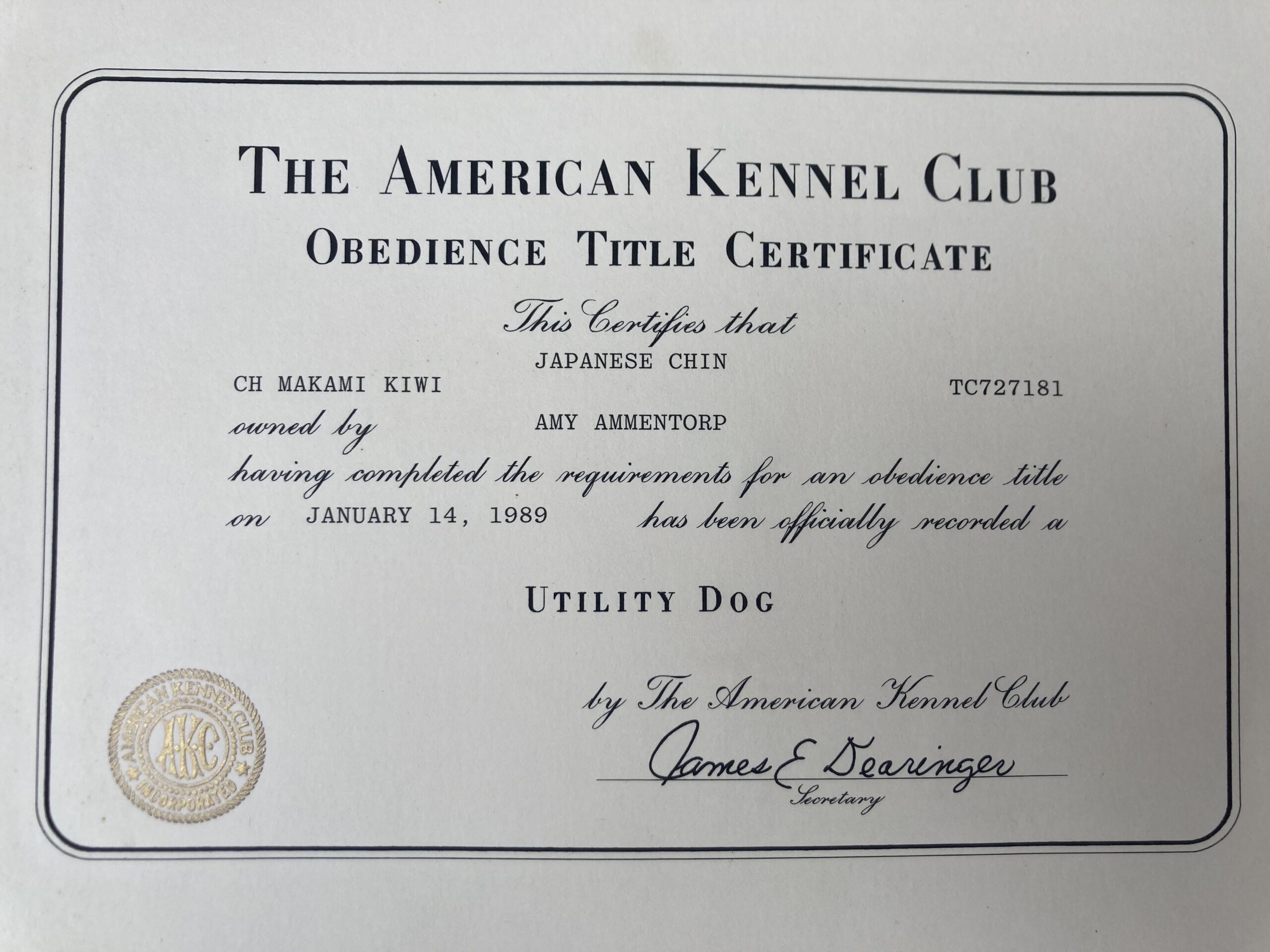 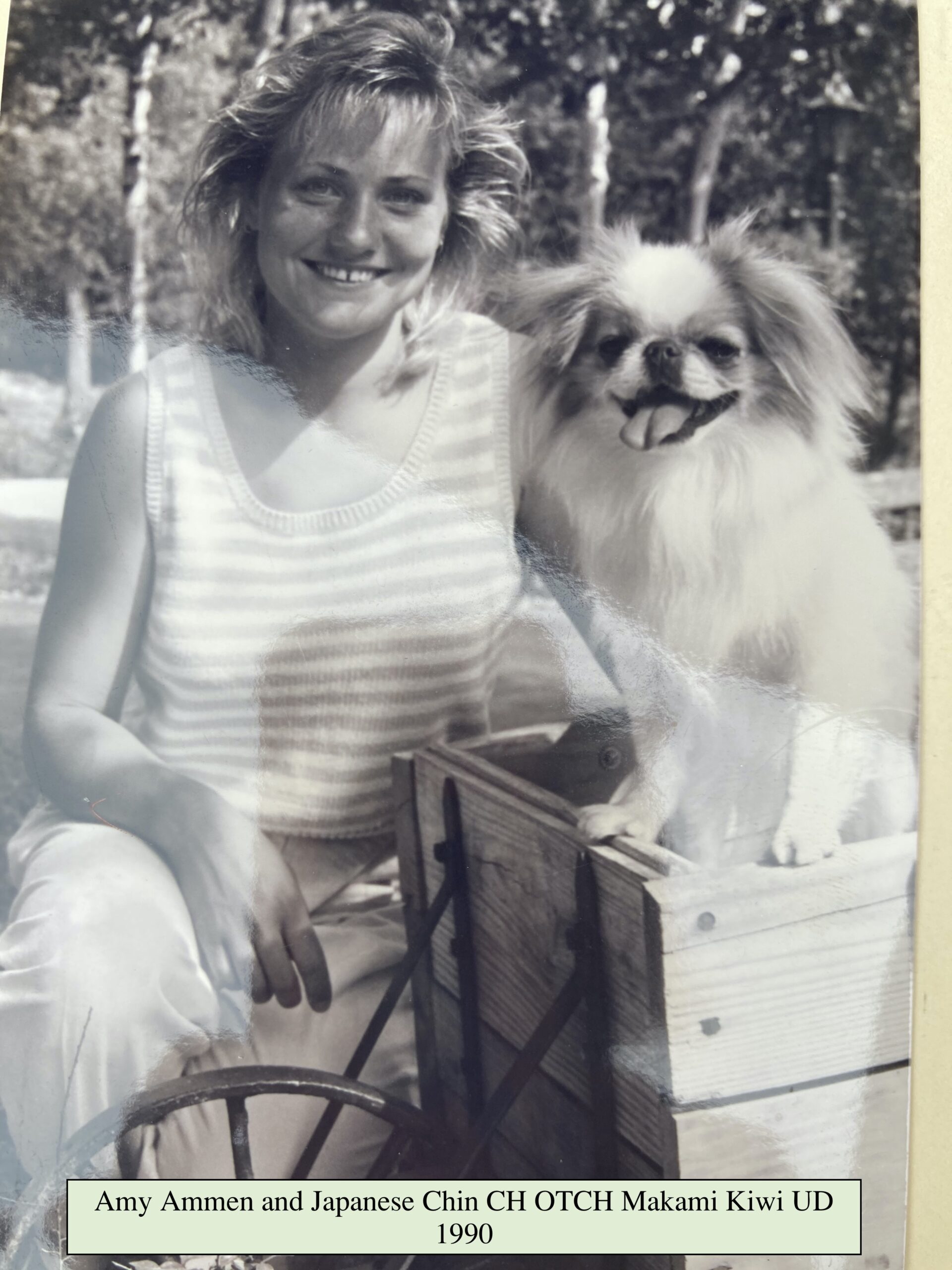 I HAD BEEN AN OBEDIENCE FANATIC for over eleven years when I bought my Japanese Chin in December of ’86. Common obedience breeds never interested me. Instead, I gravitated toward breeds with bad reputations among the obedience set. I loved the attention my briard, Siberian husky, Australian cattle dog and American Staffordshire terrier attracted when they competed in advanced classes. No one should have been shocked when I appeared with a chin, but some of my friends skeptically commented, “So, are you going to get High in Trials and a U.D. on this one, too?”

ACTUALLY, I ALWAYS HOPE MY DOGS will achieve those things but, since predicting obedience potential is largely guesswork, I just try to do the best with what I’ve got. Instead of getting rid of a dog when the going gets tough or the dog can’t seem to learn anything, I recall the seemingly impossible problems my past dogs have overcome and reassure myself that my present problems are no more difficult.

KEEPING MY PERSPECTIVE about training is easier if I reflect on the many reasons I love the dog that have nothing to do with obedience. I’m always amused by the Kiwi howls, almost inaudibly, when she feels particularly happy (Columnist’s note: A delightful trait of our breed, we call it “speaking Japanese”!); how she torpedoes into my kneecaps I call her away from playing with her buddies; and how she entertains herself by pouncing, growling and throwing her toys. Looking at her bouncy, fluffy body and her scrunched face never fails to make me smile. Little does Kiwi know, if it hadn’t been for her charm, I would have quit on numerous occasions.

THE NOVICE EXERCISES (and particularly heeling and finishes) were unusually difficult for Kiwi to master. Thankfully, Open and Utility training progressed at an average rate, with one exception: the glove retrieve. Being a toy breed, Kiwi is too short to see the glove, so she learned to faithfully take direction and that eventually she would discover the glove. Ironically, Kiwi’s strong points became her accuracy on fronts, finishes and heeling and, once mastered, the glove exercise never caused concern.

INSTEAD, KIWI DEVELOPED troublesome problems in other areas. She spooked easily at crowded shows or when children were near and regularly failed the drop of recall, signal exercise and directed jumping in a variety of ways. To improve concentration around distractions, Kiwi and I trained several times a week at stores, schools and parks.

EVEN WITH CONSTANT WORK, Kiwi is still easily stressed around distractions. So to take the pressure off, we frequently stop and play after she completes a tough exercise. When Kiwi is confused, freaked out or just belligerent, I never coax her into working. Instead I confidently show her she must keep working. My dog training philosophy is founded on three basic rules: the dog can never quit; allow the dog time to think and work; and accept that the dog isn’t perfect.

In the next column, Amy tells of the showing of Kiwi and the exciting day that she finished her title. My sincere thanks to Amy for sharing this with us. Until next time, Chins up! ###

This month’s guest columnist is Amy Ammen[torp]. I can’t imagine anything much more cheerful than what she has to say, so read and enjoy.

ON JANUARY 14th at the St Petersburgh show, my chin, Ch. Makami Kiwi, finished her Utility Dog title, earned High in Trial with 198 out of Utility B and High Combined (Utility plus Open score) with 392 points. Kiwi was 27 months old when she finished, and it took only four tries.

THIS IS THE FIRST TIME a chin has earned a U.D. or an American HIT. In addition, because Kiwi got all of her legs in less than one year (C.D – U.D.), she also earned a Dog World Award.

ALTHOUGH KIWI IS DOING WELL, she was a slow starter. After getting the premium lists for the Kansas Specialty (April ’88), I decided to show Kiwi. Unfortunately, what little training she’d had didn’t seem to be making an impression. My goal was to get a respectable score of 194. I worked on a lot of motivation to offset the stress of training, especially since I had the deadline of the specialty to meet. We worked out some of the lagging problems and confusion about finishes. the result? Two scores of 194!

AFTER A COUPLE MORE MONTHS of practice and only a little improvement, I entered a show to finish her C.D. and get it over with — Kiwi obviously had no more potential and I had no more patience. Practice sessions became more frustrating, and the lagging and weaving on heeling worsened, so I stopped training and wasn’t going to show. Then, at the last minute, I picked up my armband.  Kiwi worked her hardest and best, and earned a 195.5 and third place. I was so excited, we entered several more Novice shows and earned a couple 197.5 and placements.

AROUND THAT TIME, a friend asked about my dog training goals. Laughingly, I said I wanted to finish Kiwi’s U.D. before the end of the year. With the year more than half over, and Kiwi very green in Open and barely started in Utility, my friend laughed too. So, while Kiwi didn’t finish on schedule, she came very close, and I was thrilled. I’ve never ever owned a dog with more determination and stick-to-itiveness.

I’m delighted that Amy shared this with us. Perhaps only chin people will appreciate what an accomplishment this really is. Congratulations to Amy and Kiwi, and thanks to Amy for choosing a chin.

“IS THAT A CONDITION OR A DOG?” This question was asked by the husband of one of my seminar participants when she told him I had a ‘Japanese chin.’ I never met the man, but his response still makes me laugh.

CH AND OTCH MAKAMI KIWI WAS RETIRED in 1991 at the age of 4. Here’s the backstory: In 1987, I searched for a toy breed and chose the Japanese Chin because there had never been a UD Chin, and achieving a “first” held great appeal. Far as I know, Kiwi is the first and only dog of any breed UD to go on to earn an OTCh.

MARY BRANSFORD of Wichita is noteworthy for being the only breeder to give me the time of day. Hopefully that’s changed, but in the 1980’s Chin breeders were inexplicably arrogant. Mary sold me a top-notch bitch for a rock bottom price and was our biggest fan.

KIWI WASN’T A NATURAL OBEDIENCE PERFORMER but she was sweet and I LOVED working her. Because I miss her so, I hesitate to own another Chin; it wouldn’t be fair to compare a predicessor to Kiwi despite my affection for the Japanese Chin. That would be the breed, not the mythical condition.

Have a question? Please use this form to contact me about your goals, concerns, pertinent details, physical limitations, dog’s background and other topics.

Visit my services page and enroll in the group class, private lesson or workshop you’d like to attend. I will contact you upon enrollment and provide additional details.